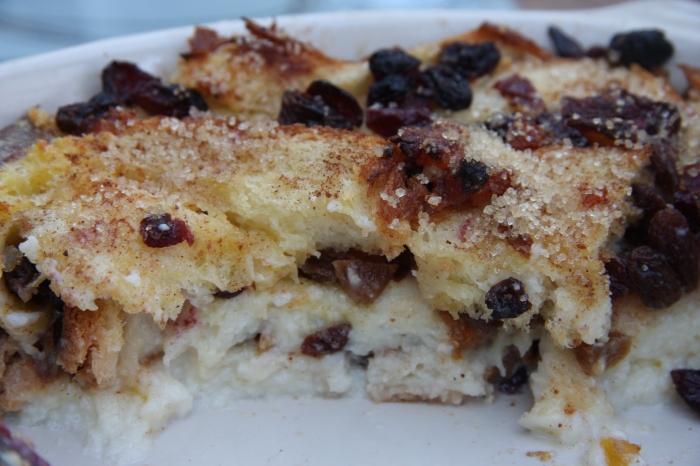 My intention was to make a beautiful Iced Cinnamon Swirl Loaf and take it to my brother’s when we went to visit him and his girlfriend at the weekend. And as it was going to be so delicious I doubled the recipe (well actually quadrupled as the original recipe was for a small loaf) so that we would have one as well. While we did end up with a tasty loaf they didn’t exactly turn out the way I was hoping. I perhaps should have stuck with Hot Cross Buns, which was my original plan!

This looked really great for a couple of hours the night before I took this photo. But there must have been some residual heat still in the loaf when I iced it because by the morning it had partly melted and slid off the loaf. This is the good side of the tidied up version…

But more than the icing, the problem was with the inside of the loaf. Less of a swirl, more of a swoosh. So cut a slice and all the fruit would fall out of the middle. I’m too embarrassed to even show you a photo but if you look carefully at the photos below you’ll get an idea. The instructions said to roll up the loaf like a Swiss Roll. I rolled them up from the long side, which I think was the problem. Had I rolled them from the short side the results may have been better. If you try it, please let me know!

The loaves smelt so delicious we had to try ours (the dodgy looking one that was already listing to one side, sneakily hidden behind the decent one…) before it had even cooled down, so it never actually got iced: by the time it was cold there didn’t really seem any point as it was impossible to eat as a slice of Iced Cinnamon Swirl Bread anyway!

And the loaves turned out to be so huge it was impossible to eat all of ours before it started to go a little stale. Which I don’t think would have been so much of a problem had the fruit been better distributed. And toasting it wasn’t really an option either. So the answer was bread and butter pudding. I only had to add milk, eggs, a little butter and a sprinkling of cinnamon and demerara sugar for the top. Everything else was already in the loaf.

Cream the yeast with a couple of teaspoons of the sugar.

Put the flour and salt into a mixing bowl. Rub in half the butter and stir in half the remaining sugar.

Mix the milk and eggs with the creamed yeast mixture and then pour into the flour mixture. My dough was very wet and hard to handle so I would recommend using a dough hook if possible. Knead for about 5-10 minutes until smooth and silky.

Put the dough into an oiled bowl and cover with oiled clingfilm. Leave to rise until about doubled in size:

Quite a lot of dough!

Turn the dough out onto a floured surface and fold repeatedly in on itself to knock out the air. Roll out to rectangle, around 15 x 25cm or 6 x 10 inches. 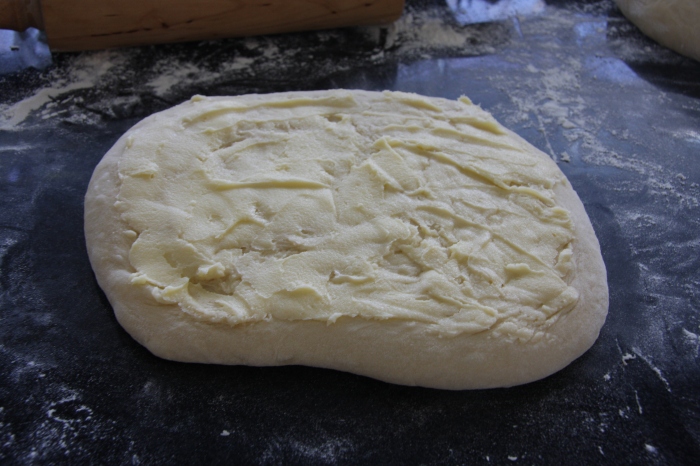 Spread the butter and sugar mixture over the dough

Mix up the fruit, the remaining sugar and the cinnamon and sprinkle over the dough. I chose not to add the remaining sugar as I thought it would be sweet enough already. It was definitely sweet enough for my taste but I think the sugar would have helped bind the fruit together a little. It may be a better idea to add the sugar to the fruit rather than the butter and leave some of it out that way.

Pack the fruit on top of the dough

Roll up your dough from the short side, not the long side like I did, and tuck the ends under to seal:

Roll up from the short ends, not like this!

Put the rolled up dough into a well greased 2lb loaf tin. (Or divide the dough and fruit mixture in two and make two rolls for two 1lb loaf tins).

Cover again and leave until about one and a half times the original size. 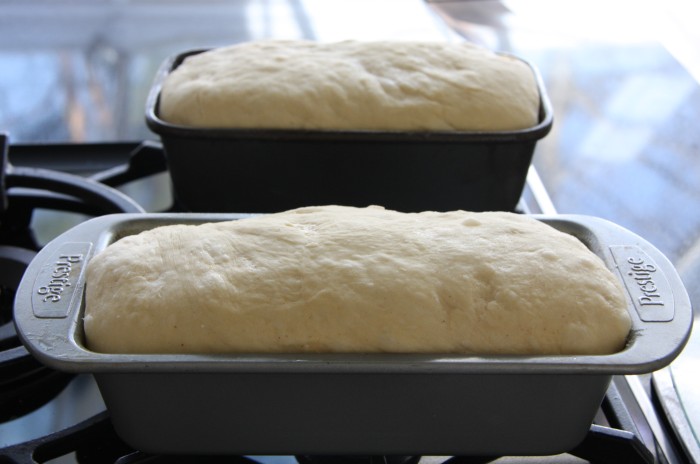 Leave to rise again and leave lots of room in the oven for the loaf to rise as well: mine actually hit the top…

Set the oven to 200ºC and when it is hot and the dough is ready, bake for around 40 minutes, or until the loaf is well browned and risen and the base sounds hollow when tapped.

Allow to cool completely before icing.

Sieve the icing sugar into a bowl and slowly add enough water (by the teaspoonful) to mix to a stiff paste. Spread smoothly and evenly over the completely cooled loaf.

You should have a lovely swirled cinnamon fruit loaf. But if you don’t, this makes a brilliant bread and butter pudding!

About 1 pint of milk

A sprinkling of demerara sugar and cinnamon

Layer your bread, butter side up, in an ovenproof bowl. Sprinkle over any escaping fruit:

Layer up your bread and fruit

Mix the eggs and milk and pour over the fruit bread.

Sprinkle over some demerara sugar and some extra cinnamon if you would like. 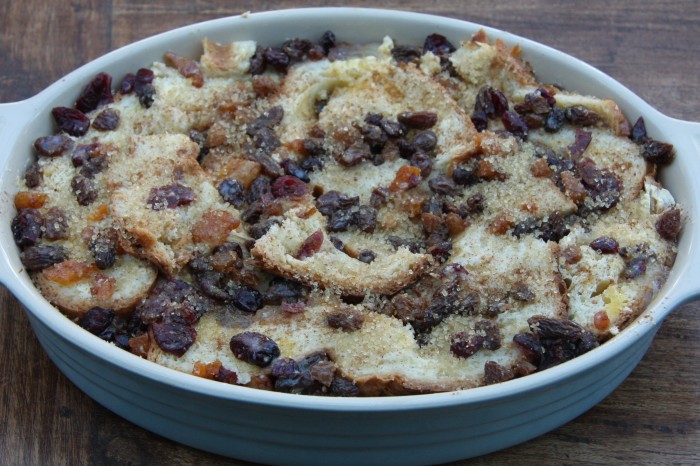 Allow the pudding to stand for a few minutes to soak up the milk. You may need to add a little more milk but it shouldn’t be swimming in liquid.

Bake for around 25-30 minutes until the custard has set and the top has started to go brown and crunchy.

Not such a disaster after all!

This is really good warm and doesn’t need much with it: serve it on its own or with cream or ice cream.

Like Loading...
‹ Making Sourdough Bread with yeast as well
Coffee Cake – not to be confused with Coffee Cake ›