Home › Baking › Homemade Bread Recipe (and why it is so much better for you!)

Homemade Bread Recipe (and why it is so much better for you!)

Flour from the Norfolk Watermill

My parents recently visited Norfolk and brought me home a present of flour milled in Norfolk’s only flour producing watermill, from grain grown by East Anglian farmers. They brought me a packet of white flour and one of  “nutty oats and seeds” flour. It’s amazing to think that all flour used to be milled without the benefit of electricity. Wind or water power was a technological advance that lasted for a couple of thousand years up until the Industrial Revolution.

And with the Industrial Revolution flour keeping times needed to be extended so manufacturers began to remove the germ, thus removing the part that would turn rancid. And as the science of breadmaking developed, bleaching and maturing agents were added to the mix along with fats and other ingredients to reduce the timings and increase the profitability.

My friend Magda, who is doing a(nother) degree with a view to becoming a nutritional therapist, lent me a book called Not on the Label a year or so ago. It makes scary reading, and not just about bread. I have changed a lot of my eating habits since reading it. I think I have bought packaged, supermarket bread maybe a handful of times since, and only because I had to. And the shortened processing times are most likely responsible for the difficulties people now have digesting these products.

I try to make all our bread and when I can’t, or forget, I go to the bakery. I have a feeling the bakery bread has its fair share of additives but I still think it is probably better than packaged sliced bread. For the real thing I think I need to find an artisan baker. I used to make all my bread in the breadmaker, but after doing a bread making course (not a long one, it was about four hours) I finally started to understand what I was doing and gained the confidence to knead it myself. It is very therapeutic, if you have the time!

I use different flours in different proportions at different times; granary, seeded, white, wholemeal, spelt, wholemeal spelt, and so on. Sometimes I add seeds, or nuts, or dried fruit. More often than not, for basic bread I now use the “crockpot” method as you leave the dough to rise just once and for ages – the longer the better. You don’t need to worry about timings or knocking it back and leaving it to rise again. I often put it together in the morning and bake it in the evening, or put it together in the evening and bake it the next morning. You can find that method here. The recipe is for white bread but you can use the method for any type of flour.

I used to think that sugar was necessary for the yeast to develop: I now know that it isn’t. The only ingredients I ever use in normal, everyday bread are flour, yeast, salt and water. And if you are lucky enough to be given some bread flour milled the old fashioned way, from locally produced flour, even better.

The bread it made was delicious but the kids found it a bit too seedy for their tastes so the next time I mixed it with some of the white flour also from the mill and they loved it. 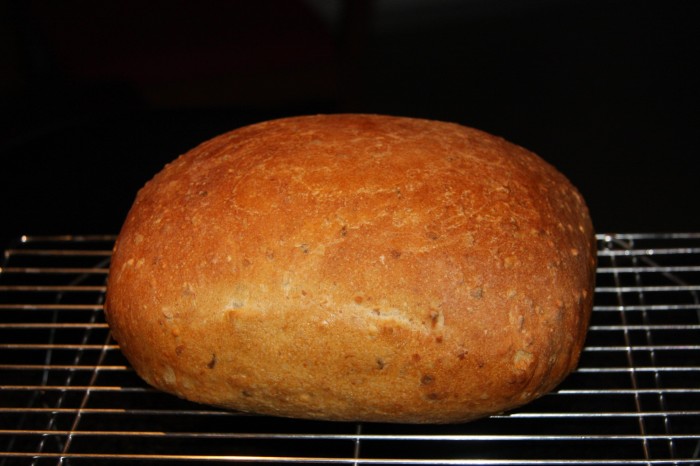 Once you get in to the habit of making your own bread it’s difficult to go back to eating store bought because, even if you ignore all the implications of the processes and additives, it really just doesn’t taste as good. If you can find the time I highly recommend it. And if you use a breadmaker it really is as simple as measuring out flour, yeast, salt, water and maybe some sugar. Three hours or so later you have a loaf of fresh bread.

And this may sound strange coming from someone whose posts mostly contain a lot of refined sugar, but I am trying hard to eat more healthily and banish as much processed food as possible. My justification for the cakes is that at least I only eat homemade!

About 330ml warm water, more if you are using wholemeal or granary flour

Weigh the flour out in to a bowl and add the salt to one side and the yeast to the other.

Turn out onto a work surface (it doesn’t need to be floured) and knead for ten minutes or so, until it forms a nice ball of dough. You will feel the texture change as you need. You want quite a wet dough so if you are using wholemeal or granary flour you may need to add water. Don’t worry if it sticks to the work surface at first.

When it is ready put it into a large oiled bowl and cover with oiled clingfilm or a tea towel.

Leave for a couple of hours or until roughly doubled in size.

Turn out onto a floured work surface and gently knead into the shape you want it. You do not need to knead it for long at all.

Shape the dough and put it into an oiled loaf tin or on a baking sheet.

Allow it to rise again for about 45 minutes to an hour.

Heat the oven to 250ºC. Put the loaf in and immediately turn the oven down to 220ºC. It should take about 20 minutes to bake: check by tapping on the base of the loaf. If it sounds hollow it is done.

Remove from the tin and allow to cool on a wire rack.