I was lucky enough to spot a note about the Real Bread Festival in a magazine recently and made sure I got on their website and booked a couple of places on a Richard Bertinet hands-on workshop. Not only was it a chance to learn from a master baker, it was also an opportunity to take home some fresh bread!

The Festival was set up and run by Valentina Harris, who was really lovely and surprisingly relaxed given that the wind had blown away the tent that had been set up for the workshops and demonstations. Somehow a replacement had been found, unfortunately positioned under the railway bridge so it was a little noisy every time a train came into or left the station but it worked just as well!

I have mentioned Richard Bertinet before and he has a specific technique for breadmaking that I had tried to master using his book. I wasn’t entirely convinced I was doing it properly so was really pleased to be able to see how he did it first hand.

So I invited my mum too and off we went to London. There were about twenty of us in total for the workshop and we had a brilliant morning. Richard Bertinet took all the time and trouble necessary to make sure that everybody knew what they were doing. We learnt the technique he promotes, which is the way that French bakers worked the dough before any machines were used in the process.

And fans of the Great British Bake Off will be excited to know that half way through the morning Paul Hollywood zipped in with his camera and sound people, spoke to a few of us (not me!) and zipped out again. I was concentrating so hard on trying to get the technique that I didn’t even realise at first.

We made white bread dough that we set aside to rest and then were given some dough with which to make Fougasse. It looked easy when Richard did it but it’s not as easy to remember where to cut the piece of dough when it is in front of you! There were a lot of very unique fougasses…

We went off to look at the stalls that were set up for the Real Bread Festival while the fougasse was baking and cooling. There were some amazing artisan breads, cakes and pastries – all very tempting – along with proper coffee and other “real” food. 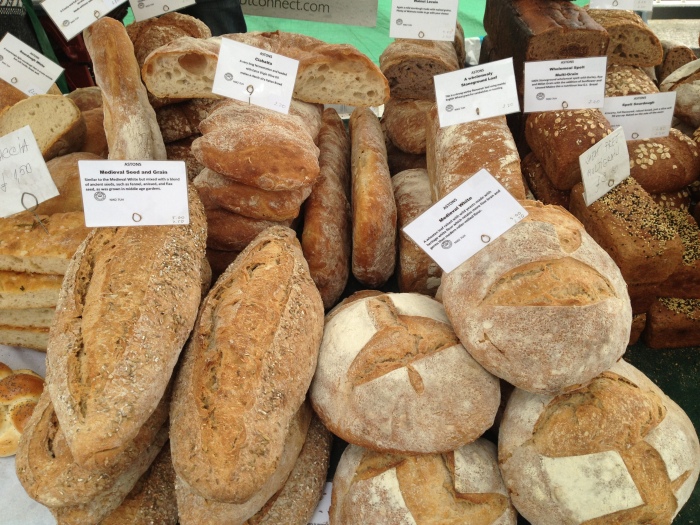 So I have been practising my bread making (and eating) technique recently and think this seeded granary bread is particularly yummy.

Add the liquid to the dry ingredients and combine well in the bowl.

Turn out and knead well (using your preferred technique!). There is no need to add any flour at this stage, even if the dough seems a little wet.

Put in a greased bowl to rest and cover with a tea towel. When it has roughly doubled in size it is ready. The amount of time will depend on the room temperature.

Turn out on to a floured surface and add the seeds. The dough does not need a lot of kneading at this stage – you are really just making sure that the seeds are evenly distributed.

Shape into a loaf and put into a greased tin or onto a greased baking tray to prove for about 45 minutes or until about double in size again. Scatter some more seeds over the top of the loaf.

Heat the oven to 250°C. Put the loaf into the hot oven and immediately turn down to 220°C. Bake for about 20 minutes or until golden brown on top and the bottom sounds hollow when you knock on it.

Delicious for breakfast with homemade apricot jam and freshly made coffee.

I’m also looking forward to the Tea and Coffee Festival and the Chocolate Festival that are coming up soon!