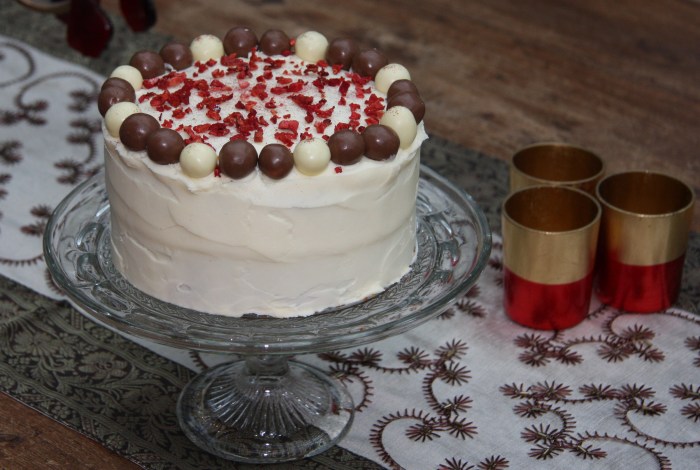 I found some very appealing-looking freeze dried strawberries in the cake decorating aisle a while ago and had been looking for a good reason to use them. I wasn’t sure whether to put them in or on something but I thought using them as a decoration would be a good start.

So when my friend Sara had her birthday recently I thought they would be perfect on top of a cake. Sara’s daughter (bizarrely) doesn’t like chocolate so I made a vanilla sponge and used vanilla buttercream.

I made a vanilla victoria sponge in a single deep sided cake tin. I halved the cake and sandwiched it with jam and vanilla butter icing. If you are going to ice the sides with buttercream it will look much better using a single cake and halving it than using two cake tins and sticking the two halves together; unless you level the bottom layer, at which point you have two uneven layers, you will have a big gap at the bottom.

I iced the top and sides with more buttercream and used my trusty side scraper again to (almost) smooth the sides.

I thought a border of maltesers would look good and I used both chocolate and white maltesers. Then I sprinkled the strawberry pieces over the centre.

The bright red of the strawberries contrasts beautifully with the vanilla buttercream and they add little bursts of flavour, picked up by the jam in the middle of the sponge.

Cream the butter and sugar until pale and creamy.

Add the eggs, one at a time until well combined. Add the vanilla essence.

Fold in the sieved flour and mix until well combined.

Pour into the cake tin and bake for 45-55 minutes or until golden and springy to the touch. The exact time will depend on your oven.

Allow to cool for a few minutes before removing from the tin and placing on a cooling rack. Wait until the cake is completely cool before halving and icing.

Sieve the icing sugar. Beat the butter in a mixer until smooth and creamy.

Add the sieved icing sugar and beat until fully incorporated. Add the vanilla essence and beat again for several minutes.

You may want to add a small amount of water or milk to get a thinner consistency to make it easier to spread.