Home › Fruit › Blackcurrant Jam and growing your own fruit

Blackcurrant Jam and growing your own fruit 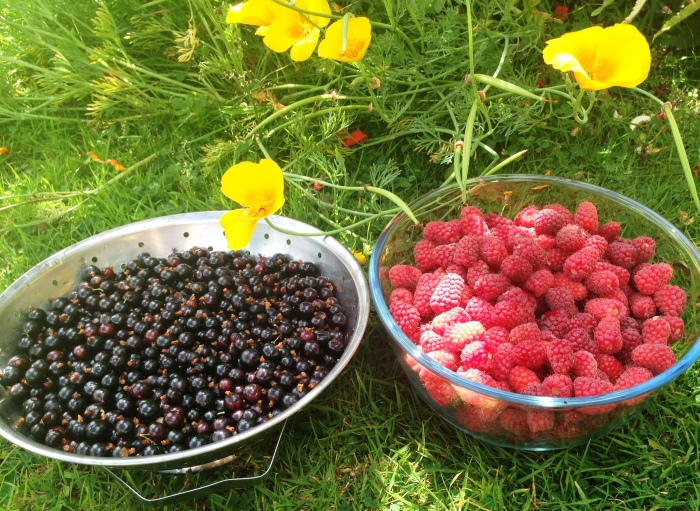 Blackcurrants and loganberries from my parents’ garden

Last weekend I went to stay at my parents’ for a couple of nights while they were away. They have a relatively small garden but it is full of beautiful flowers, fruit and vegetables: they spend hours on it and it really shows. Although they have willing neighbours who will look after things when they are away, I was doing them a “favour” by picking their blackcurrants and loganberries, as well as watering the pots and the greenhouse. I spent a lovely couple of hours, out in the sun, picking the fruit and wondering, yet again, at how much can be produced in such a small space. All it takes is a bit of time and dedication.

They have grown loganberries up along the back wall and I managed to pick a kilo of fruit, leaving plenty more still ripening. I also picked a whole kilo of blackcurrants as they keep them in a net cage, out of the reach of the greedy pigeons. I have had a blackcurrant plant for several years: it lived in a pot and has survived several house moves. It was in desperate need of planting out so I waited until the small amount of fruit that it produced this year was ripe, picked the berries and then planted it out. The pigeons must have been fooled by the pot as within a day of it being in the ground the tiny bush had a pigeon sitting in it (even though the pigeon was almost as big as the bush), eating the last few berries. Next year I will be getting a cage too! I also some have some redcurrant bushes that my parents found when I moved in, hidden behind and underneath out of control plants, near the newly discovered pond. This is my entire “harvest” of berries this year:

This doesn’t include the five blueberries slowly ripening – the blueberry bush definitely needs planting out!

I like the idea of making something with them that will last so there is a reminder of all that hard work (not mine, obviously!) and that can be enjoyed slowly. Even though my parents said I could take all that I had picked I didn’t really think that was fair so I put half a kilo of each fruit into the freezer for them and brought the rest home. As blackcurrant jam is one of my favourite jams it made sense to make jam with the blackcurrants, and I even threw in my few black- and redcurrants for good measure. We have been eating our way through the loganberries but as I still had 200g left I even managed to make a small pot of loganberry jam.

Jam is very easy to make and a great way of preserving fruit. As long as you have fruit, sugar and some jam jars the chances are you can make jam. A little lemon juice will help it set but isn’t essential unless your fruit is particularly low in pectin (and then you can just combine it with a higher pectin fruit). If you’d like some tips on making jam then check out my Jam Session post.

I weighed my fruit, softened it in a pan with a splash of water and some lemon juice: 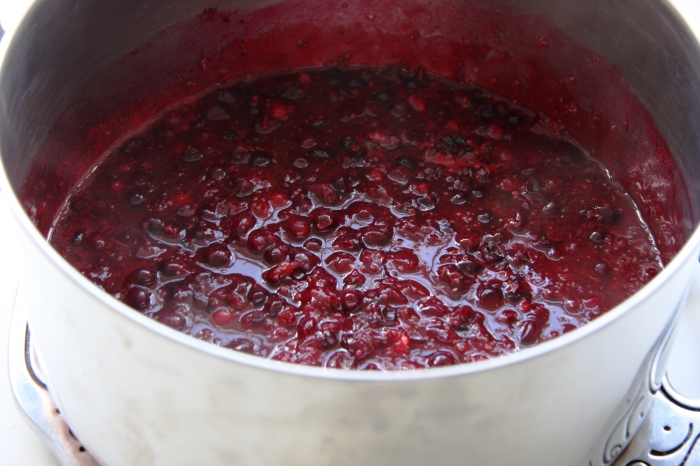 Soften your fruit before adding any sugar

When the fruit was ready I added an equal weight of sugar. Once it had reached setting stage I took it off the heat, mixed in a small amount of butter to get rid of the scum and poured it into sterilised jars.

Skim off the scum or add a small amount of butter

The tomato plants my mum grew from seed and gave to me are starting to shoot up and small tomatoes are forming: I might not be making tomato jam with them but I’m very excited about homegrown tomatoes. I have a small gooseberry bush that might start producing fruit if I look after it properly. Next year I will be more organised and maybe one day I will have enough fruit of my own to make a whole pot of jam… 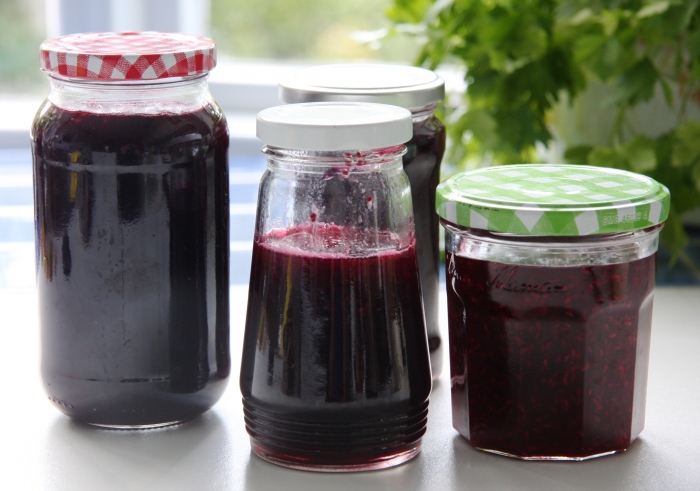