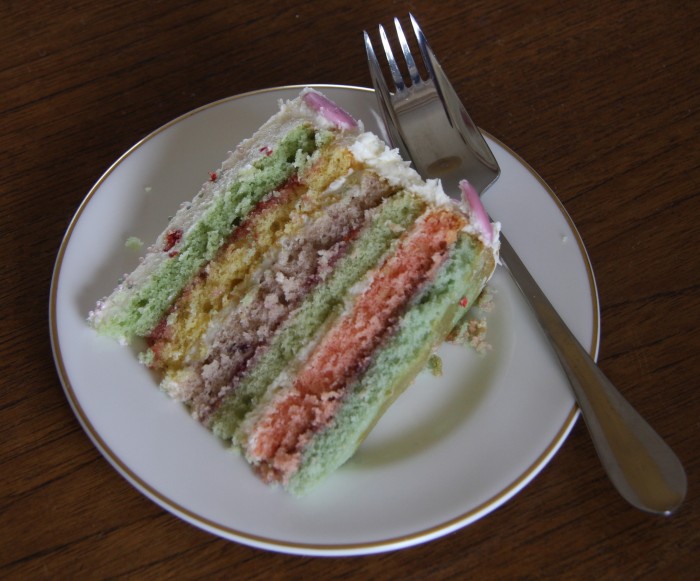 A slice of Rainbow Cake

This isn’t a true rainbow cake because it doesn’t have the colours of the rainbow, in order. My daughter asked for a rainbow cake for her birthday and we had seen a pastel layer cake in a magazine that she really liked – I thought it would be good to make a pastel rainbow-style version for her.

One of the great things about this cake is the outside. A plain exterior hides a colourful interior and by the time her birthday came she had forgotten that she had asked for a rainbow cake.

So it was a real surprise when we cut into the cake: 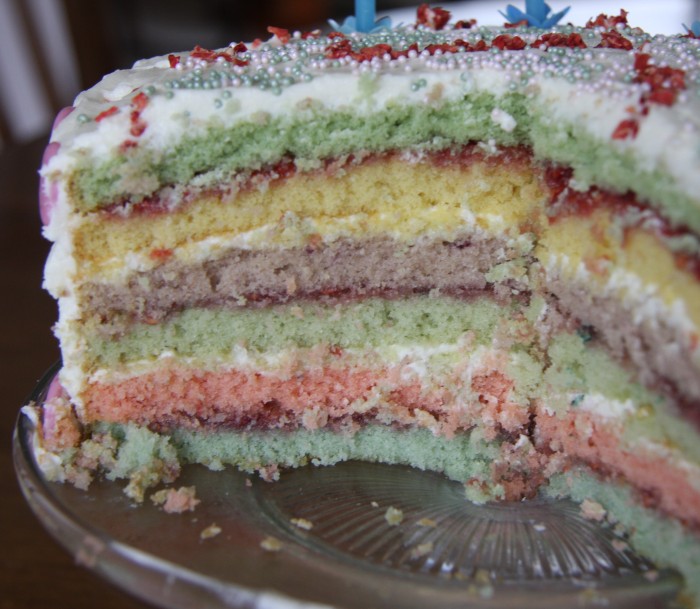 The brightly coloured rainbow cakes are amazing and are often made with layers the same depth you would use for a two layer cake. So they create huge towers of cake. I wanted a cake that wasn’t significantly larger than a normal cake so did thinner layers and what it lacks in size it makes up for in style, I think.

I made a basic vanilla Victoria sponge with 6 eggs, which I would use to make an 8″ three layer sponge cake. Because I wanted each layer to be exactly the same, I weighed the mixture and divided the total by six, found six bowls and measured out equal amounts of cake mix.

I then coloured each bowl with a different gel colour. I have four 8″ tins so I baked four of them and when they were done I did the last two.

Because I used gel colours I had to do a lot of mixing to get an even colour and it changed the texture of the mix quite significantly. When the layers came out of the oven they had not risen as much as I was expecting and I had a bit of a panic… Not only was I worried the layers would be too thin, I was also afraid they would be tough (which luckily they weren’t). If I made these again I would definitely use liquid food colouring!

I made vanilla buttercream for the filling but was worried there would be too much icing for the amount of cake so I alternated the layers of buttercream with layers of homemade raspberry jam: 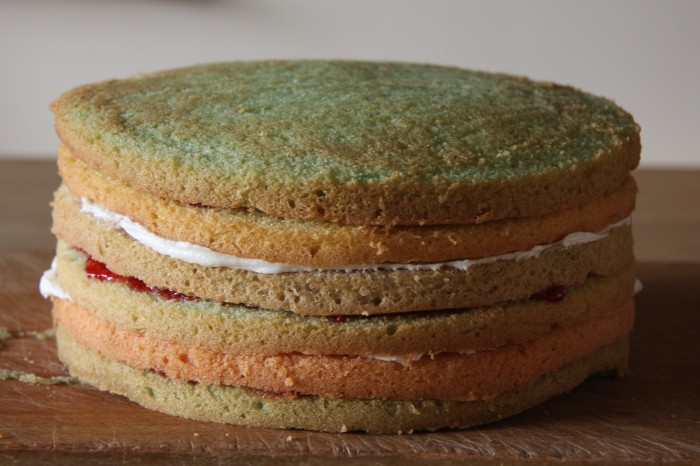 Alternating layers of buttercream and jam

I gave the cake a quick crumb coating with a thin layer of icing to try to avoid too many crumbs ending up in the icing. It worked well as when I put the proper layer on there weren’t really any obvious stray crumbs.

I used the wrong end of a teaspoon to mark out “12” and then carefully sprinkled freeze-dried strawberries into the little channels:

Although I was intially worried about the layers being too thin, in the end I was really happy with the size of the cake. And while it is not technically a true rainbow cake, I think this type of cake makes a brilliant birthday cake. Hopefully the birthday girl felt the same!