Petra is a friend and one of my blog’s first followers. She is also in the book group that I mentioned in my Focaccia post. On her last turn at hosting Book Group she chose “Gone Girl” by Gillian Flynn, a great book and highly recommended if you haven’t already read it and like a thriller.

When organising a party for her 50th recently and her husband started muttering about cake, Petra pointed him my way and hoped for the best.

Luckily it was easy to get Alistair to decide on all the important points – after a couple of emails he knew he wanted a large square vanilla sponge with vanilla buttercream, covered with white sugarpaste and yellow flower decorations. So far so good!

After that things got a bit trickier as the rest was up to me.

I knew it would be impossible to make the cake before the day it would need decorating as I only have an American style fridge freezer and the freezer part is not big enough for a 12” square cake. And I also wanted to make two cakes instead of cutting one large one in half as I was worried the sides might be a little burnt by the time the middle was cooked through.

So I knew it was imperative to know exactly how it was going to be decorated before starting it, and to have all the decorations ready ahead of time as it was going to take a while to make and cool the cakes. Which is a departure for me because I generally have no real idea of how a cake is going to look until it is finished. And have loads of brilliant ideas after the event.

No doubt professional cake decorators do this all the time, but I had the bright idea of making a template and some practice flowers to see what worked and how. (And more than a few hours before the actual flowers needed to be ready!).

Using the template and practising with the white sugarpaste, it was possible to get an idea of what would look good and how many flowers would be needed. It was also easy to see that my new alphabet cutters would fit and I could play around with the layout.

Bits and pieces for the cake

With a proper plan, I was able to make the flowers for real, using a couple of shades of yellow and a little white sugarpaste. I left them to dry for a day and then layered them up to create different patterns, colours and sizes. I put gold sugar balls in the centre of some and used mini flowers in others.

I also made some tiny flowers to thread onto gold floristry wire, secured them with a touch of water and tried to squash them onto the wire as much as possible while keeping their shape, in the hope that they would set and stay put. Having expected them to crack and fall off, or for the wire to be too delicate to hold them up, I was amazed at how well it worked.

So all that remained was to make the cakes, one after the other, wait for them to cool and then assemble it.

It had been quite a while since last covering a cake with sugarpaste; maltesers and their friends have had all the glory recently, so I actually really enjoyed doing this one (more so once it was actually on the cake and not too uneven…).

Then on went the ribbon, the flowers, the Happy Birthday Petra and the topper and that part didn’t seem nearly as stressful as there was a plan to follow. 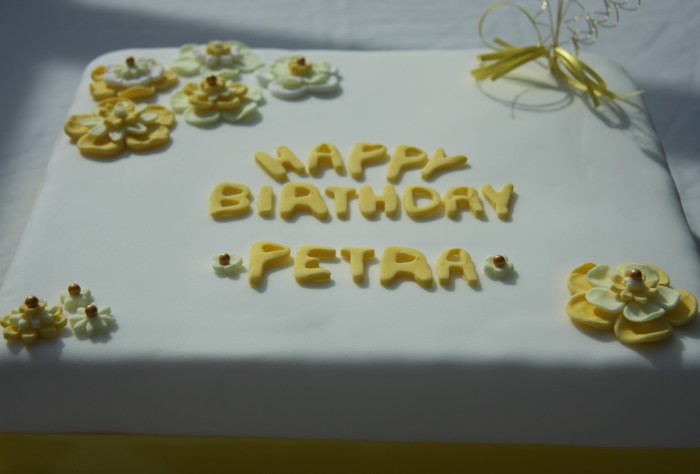 The cake with decorations

So then it was just the stress that it would taste and look good enough for a 50th birthday party! Where there would be plenty of people that I knew quite well but not brilliantly.

Combined with the extra stress of realising about three days before the party that I had agreed months previously to go to another event the same night but had forgotten to put it in my diary… And normally I have nothing to do on a Saturday night!

So feeling a little like Cinderella, I left the ball with plenty of time to spare before turning into a pumpkin and hot-footed it to Petra’s party, which was in full swing: plenty of talk of Sambuca and cocktails by this point, which hopefully made the cake look better too!

If you are wondering why there is no 50 on the cake it’s because we used a diamante pin that went on at the last minute.

So with apologies for the terrible photos, Happy Birthday Petra!