It’s been a great year for blackberries and in fact all sorts of fruit in the hedgerows. I even realised that several of the crab apple trees nearby I have had my eye on were in fact pear trees, so I gathered some with the intention of doing something with them. I’m still not sure what. Maybe some pear brandy, using the same method as last year’s quince brandy (which is now ready!) as they would be far too much work to peel and core and are likely to go off before they are fully ripe. I also have a pear tree in my garden which looked like it was going to produce loads of pears: originally they all seemed to be doing well but for some reason the majority went rotten on the tree and fell off. I have ended up with a harvest of eight pears. At least they are tasty! And the quince tree which produced hundreds of quinces last year also only has about eight fruits on it this year. So my garden might not be doing so well but the hedgerows have more than made up for it.

Pears: foraged and from my garden

I have so many blackberries I am constantly looking for ways to use them up and they are great in cake as long as you don’t mind the pips. I used the pear in this loaf in the same way as mashed banana in a banana loaf so some of the sugar comes from fruit. The taste of pear is very subtle and you could easily peel an extra pear, cut it into chunks and mix it in with the blackberries if you would like more of a pear taste to your loaf. You can also substitute the agave or honey for sugar if you don’t have any.

Put the butter, sugar and agave syrup or honey into the bowl of a stand mixer and beat until light and fluffy.

Add the eggs, one at a time and beat until well incorporated.

Mix in the mashed pear:

Mash up your ripe pears

Fold in the flour and then carefully mix in the blackberries.

Tip the mixture into your prepared tin and level gently.

Bake for around an hour but check after about 40 minutes and cover with aluminium foil if the loaf is browning too quickly.

Allow to cool in the tin for a while before removing from the tin and allowing to cool completely on a wire rack. 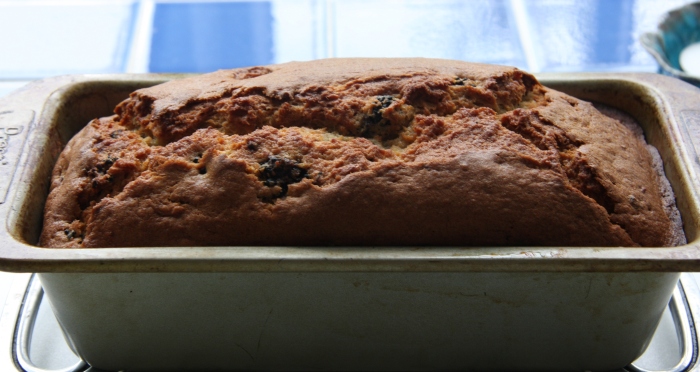 Enjoy the fruits of your labours (or the labours of your fruits) with a cup of tea or coffee. Delicious.