From the Hedgerows: Damson Crumble 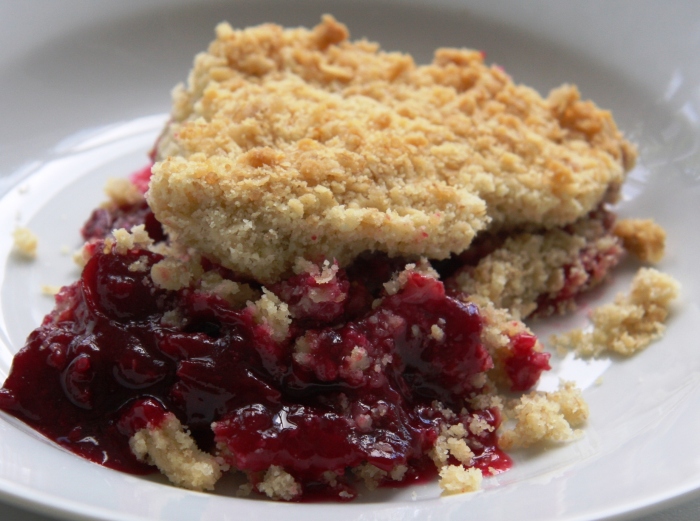 If you find a wild plum tree, make sure you take full advantage of its delicious fruit. I found a yellow plum tree a few years ago near my brother’s old house and made pots and pots of jam and put loads in the freezer too. Unfortunately the following year I was too late for them, which was very disappointing, and now he has moved… Last year my friend Vana brought me kilos of a wild plum known as bullaces after a visit to her parents’, and I was also given some damsons. Now that we know where damson trees can be found we went foraging for them this weekend, in the hope of finding some ripe fruit. And despite a minor setback (the entire network of paths we were planning to use had been closed due to works) we managed to find some. They might need a bit of effort to reach but this just adds to their appeal. Scratches from brambles and stings from nettles just make them more of a prize. 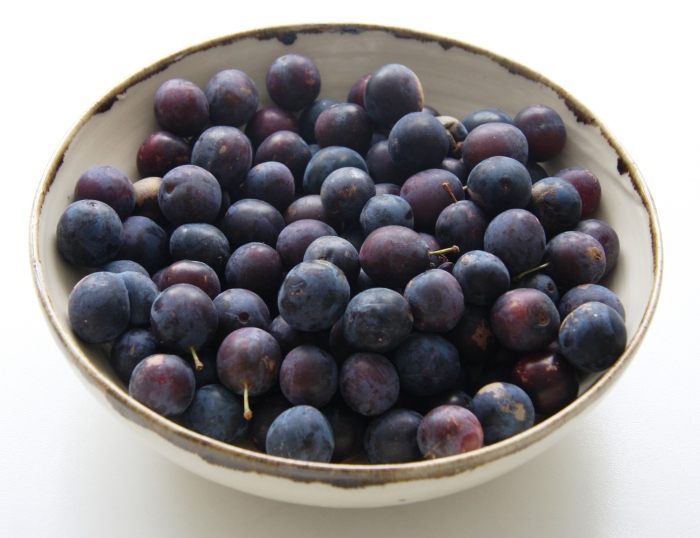 Damsons from the hedgerows

We managed to pick just over 500g of damsons from one tree. And could see at least twice as many on a completely inaccessible tree along with a huge apple tree, which was particularly frustrating. We picked more tubs of blackberries as they are really starting to ripen in abundance now. It’s still a bit early to pick the sloes for sloe gin but it’s going to be easy to find them this year: I need to start saving empty wine bottles and buying gin when it’s on offer…

Damsons can be quite strong-tasting and somewhat bitter and are much better cooked. They make absolutely incredible jam with an amazing deep ruby colour, but this time I decided to make a crumble with them instead. Removing the stones from the damsons takes a while as they do not come out easily. I resorted to cutting the flesh off the stone after the first few as it was much quicker and easier and retained the most amount of fruit. You can also cook them and then remove the stones afterwards but you are likely to miss a few. I was glad that I hadn’t chosen that option as it turned out that quite a few of the plums had been invaded: by the time I had removed the stones and discarded the damsons that came with added grubs I ended up with exactly 300g of fruit: 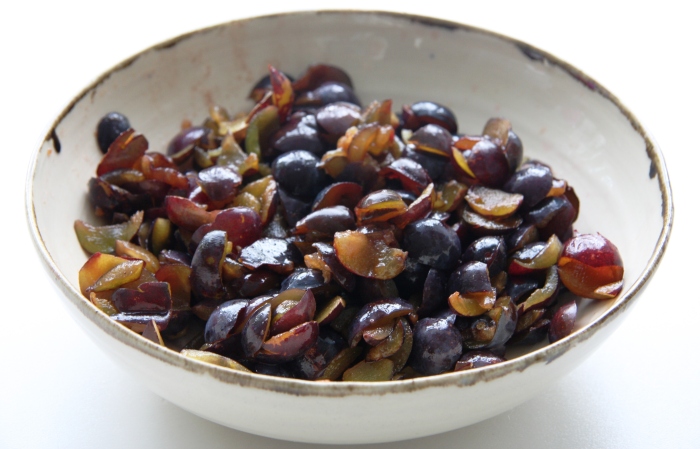 If you want your damsons to go further, or find them too strong on their own, you could combine them with apples or pears. This recipe makes a small crumble as that was the amount of fruit I had, but it is easy to adjust the quantities to suit the amount of fruit you have. If you are using a large bowl then increase the quantity of topping to one and a half, or two times. 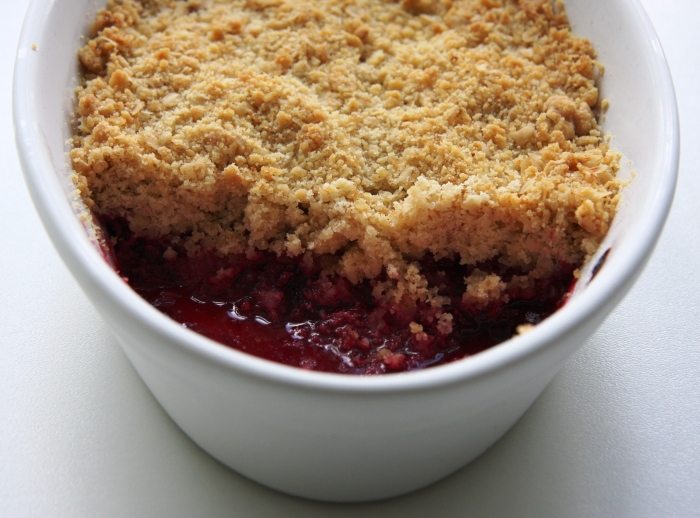 Put the damsons into a saucepan with the sugar, butter and a splash of water and heat for a few minutes until the fruit starts to soften and the juice starts to run.

Test for sweetness and add extra sugar if the fruit is still too tart.

Tip the filling into an oven proof dish: 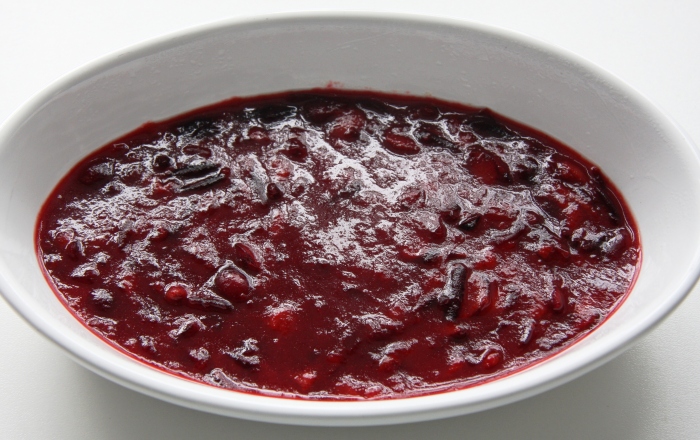 Put the flour, ground almonds, oats and sugar into a bowl and rub in the butter until the mixture resembles fine breadcrumbs.

Tip the crumble mixture onto the filling and gently distribute it evenly. Do not press it down. 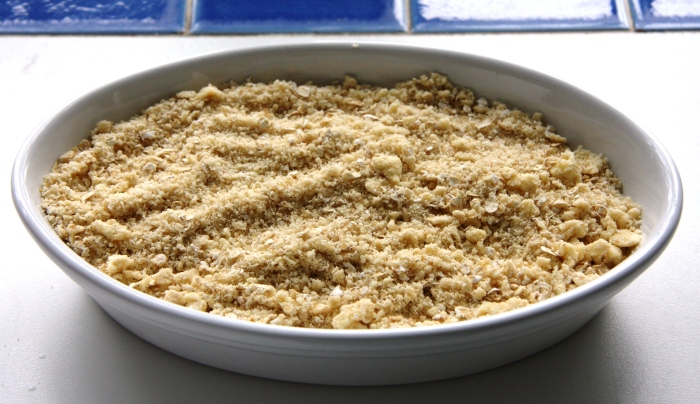 Put the dish on a baking tray and bake for around 25-30 minutes, until the filling is bubbling up and the topping is well browned. 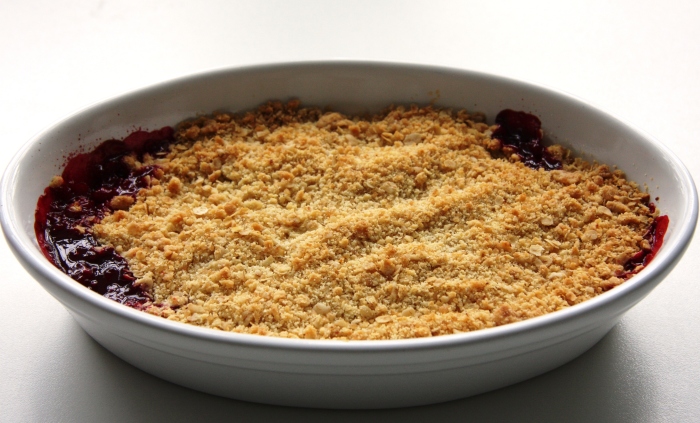 Enjoy either on its own or with custard, cream, yogurt or ice cream: the choice is yours!