If you have already finished your stash of Easter chocolate this will fill the gap. And although it might still be the Easter holidays at the moment, with the weather we are having where I live in the UK I keep thinking it is the summer holidays. The garden seemed to suddenly burst into life a few weeks ago and I realised that apart from mowing the lawn a couple of times and picking the quince, absolutely nothing has been done to the garden since my parents attacked it when I moved in, last July. It is a “cottage” garden, which I like to think of as the shabby chic of gardens. As such it can get away with being a bit overgrown. Unfortunately it had got to the stage where it was really only shabby: no chic to be seen. So I have spent the last few days trying to get some chic back into the garden. I have rediscovered the little path down the side of the border (for the second time; we only found it the first time when my parents tried to establish some order). I have filled six very large garden bin bags just clearing the border and the path already. And there is so much more to do. Thank goodness for chocolate and ginger cake…

Cream the butter and sugar together until pale and fluffy.

Add the eggs, one at a time and beat to incorporate.

Stir in the syrup from the stem ginger.

Sieve in the cocoa, flour and ground ginger and fold in carefully.

Divide the mixture evenly between the two tins.

Bake for around 20-25 minutes, until well risen and firm to the touch.

Allow to cool for a few minutes in the tins before removing and placing on a wire rack to cool completely.

Sieve the cocoa powder and icing sugar together.

Add the butter and beat on a low speed until the mixture starts to ressemble sand.

Add the milk a little at a time, and once it is properly incorporated beat on high for several minutes, until it is light and fluffy.

Use half the icing to sandwich the cake together and the rest to decorate the top.

Chop some stem ginger and arrange on the top of the cake to decorate. 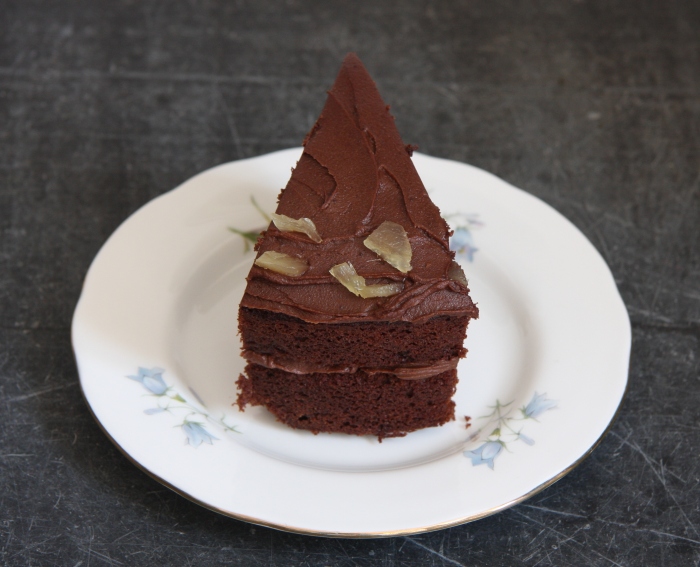