This is a great recipe if you want to make a cake but don’t have the time to stay in and wait for it to bake. Here in the UK we have had some very cold and snowy weather recently: in a lot of places this wouldn’t bring the country to a standstill, but because we don’t have the proper infrastructure we really suffer. At the beginning of this cold snap it started snowing after I had dropped the kids at school and by mid morning we were asked to go and fetch them at noon. The roads are often not salted, gritted or cleared and driving can quickly become dangerous.

I had been about to start making an apple cake as I had a new recipe I wanted to try out so I debated for a while about whether I could get there and back in the time it would take to bake, or whether I should put it together when I got back. In the end I decided it would probably be ok if I set the oven to turn off automatically as a nice cup of tea and a piece of warm cake would be perfect after a snowy journey.

And as my journey to school and back took at least four times longer than normal, I had made the right decision! So we got back to warm apple cake and it was delicious. 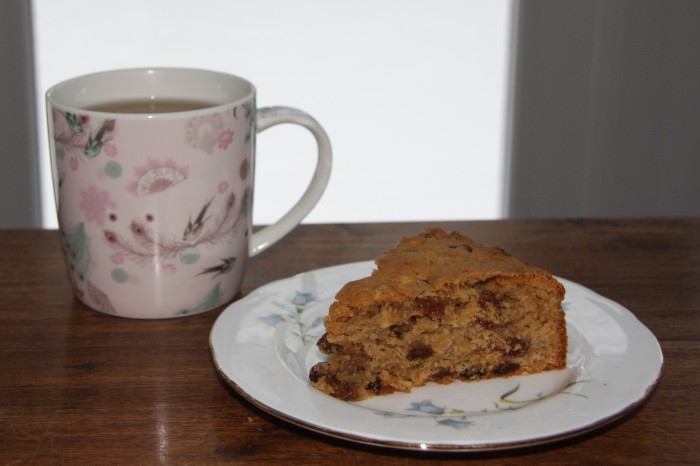 It hadn’t dried out at all and had a great texture, like fruit cake. The recipe said that it would be even better the second day but there was very little left by then for me to say for sure!

I used an 8″ cake tin which gives a relatively shallow cake. You could easily use a smaller tin to make a deeper cake and increase the cooking time slightly, but I actually think it’s great the way it is. It also called for demerara sugar to be sprinkled on the top before it is baked but I chose to leave that off.

half a teaspoon vanilla essence

In a separate bowl sieve together the flour, cinnamon and nutmeg.

Stir the flour mixture into the apple mixture and then mix in the raisins.

Spread into the prepared cake tin and level the top. Sprinkle with demerara sugar, if using.

Bake for 35-40 minutes or until firm and golden brown. A skewer inserted into the middle should come out clean.

Allow to cool for about 10 minutes in the tin before turning out onto a cooling rack. 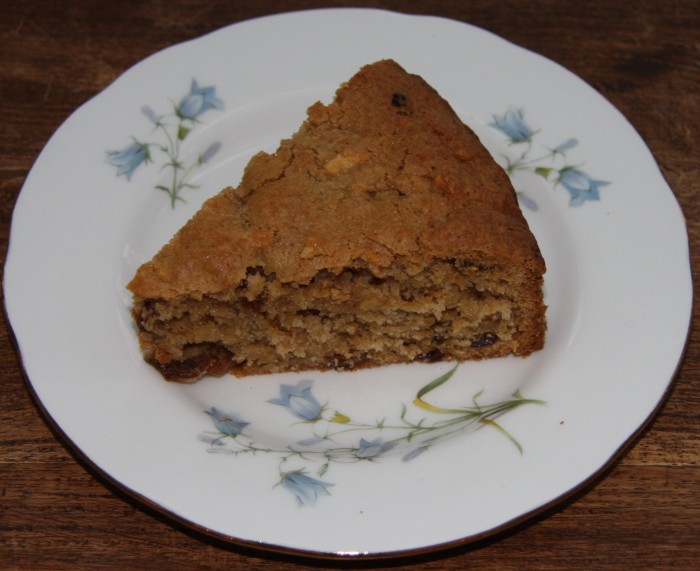