Party Cupcakes – with a green theme

I have friends with many different interests and it always amazes me how much they manage to fit into their time. They fit things in around working, kids, studying, life, and all the rest! One thing that many (but by no means all) of them either don’t have time for, or don’t have the interest for, is baking. And it seems that, for now at least, my cupcakes are gaining in popularity as a take-home piece of cake for parties. And this time my friend Kirsty asked if I could make some cupcakes for her daughter’s party.

My first response is usually panic – how will I manage to make something that looks good but not just like the last lot I made? Trying to find inspiration can be a bit tricky sometimes. Ellie was having her party before Christmas, loosely based on a Peter Pan theme so I thought maybe we could use green as a theme – it fitted with the season and also Peter Pan. They also needed to appeal to both boys and girls.

I used my favourite vanilla and chocolate cupcake recipe and used gold cases to give them a party feel. I flavoured the buttercream with vanilla and cocoa, and coloured some of the vanilla a pretty green using a gel colour. I rolled out some ready made chocolate sugarpaste and coloured some white sugarpaste green and cut out large and small stars for the toppers. I used green sugar sprinkles and green glitter on all of the cupcakes to tie them all together properly and add a bit of sparkle.

For Peter Pan, Tinkerbell, Christmas, or any party with a green theme, these should work! Happy Birthday to Ellie! 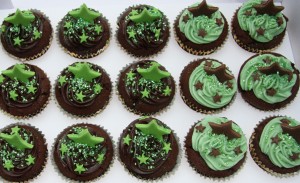 Like Loading...
‹ On Meringues, Gifts and Good Friends
Chocolate Fudge Cake – a birthday cake and dessert, all in one ›

Leave a Reply to The Scrumptious Pumpkin Cancel reply