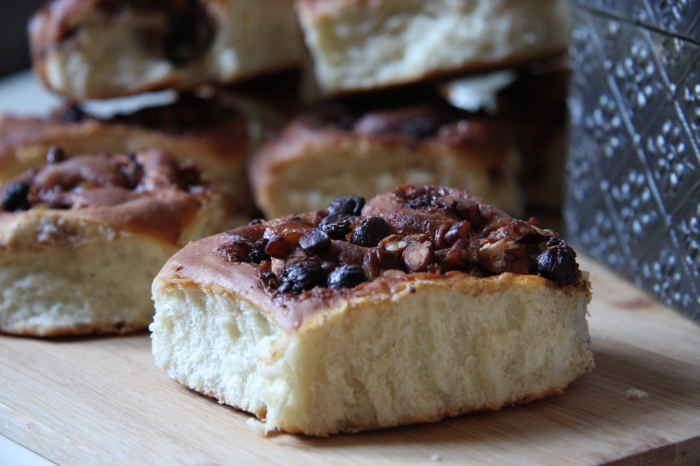 As Christmas foods were traditionally those that were far too expensive or indulgent to eat on a regular basis they tend to include a lot of dried fruits, nuts and spices. I’m lucky because I love all the typical British Christmas treats that are packed with dried fruit and really look forward to them: mince pies, Christmas pudding, Christmas cake, panettone, to name a few. (At least I consider it lucky but I guess it depends on your perspective!).  I know a lot of people don’t, however, and so these buns are designed to have some of the flavours associated with Christmas but without the dried fruit. They should satisfy those who are not so keen on mince pies or Christmas pudding: and those who have already had too much of both! But feel free to add some cranberries if you really can’t do without.

Don’t be put off making your own buns: they are much easier than their reputation would suggest and a dough hook will make life even easier. They make a great treat for breakfast over the Christmas period and are so much tastier than store-bought buns. Nuts and dark chocolate give them a slight nutritional advantage and I have kept the sugar to a minimum, both in the dough and in the filling. As there are no additives or improvers they will go stale quite quickly, so if you’re not planning on eating them all in the first couple of days just put them in the freezer until you need them. They can also be prepared the night before and left for the final proving overnight in the fridge. If you are struggling to get teenagers out of bed over the holiday period, try the aroma of freshly baked cinnamon buns! 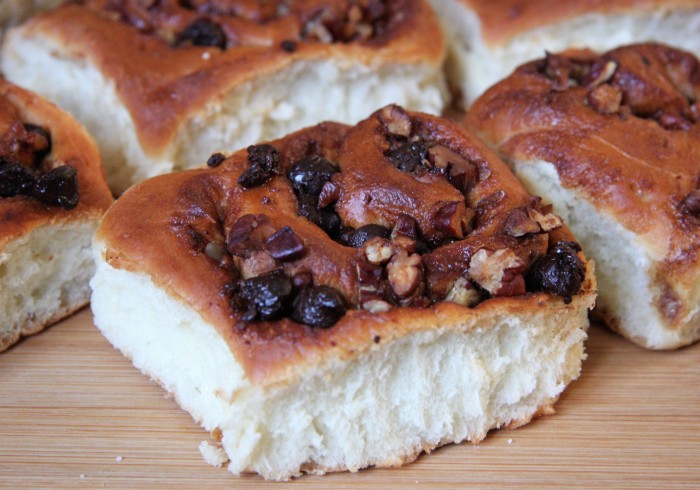 This is a very wet, sticky mixture and is most easily mixed in a stand mixer using a dough hook, although if necessary it can be done by hand.

Put the flour into a large bowl and add the salt, sugar, yeast in separate sections of the bowl.

Add the warmed milk and melted butter and mix for about 5-10 minutes, until the dough becomes smooth and silky.

Put the dough into a large oiled bowl and cover with oiled clingfilm or a tea towel. 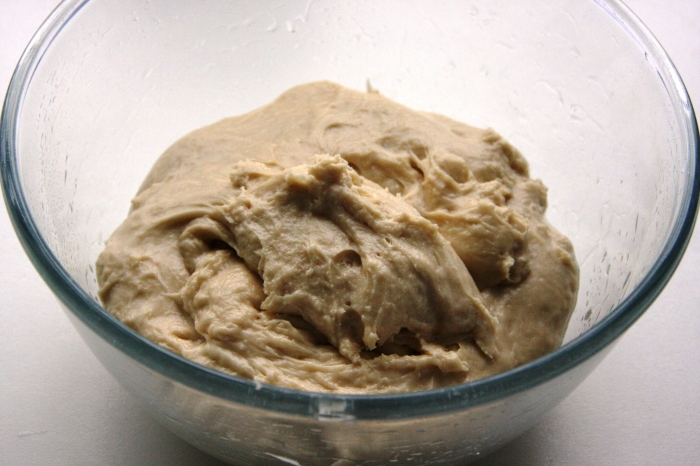 Leave to rise until doubled in size. 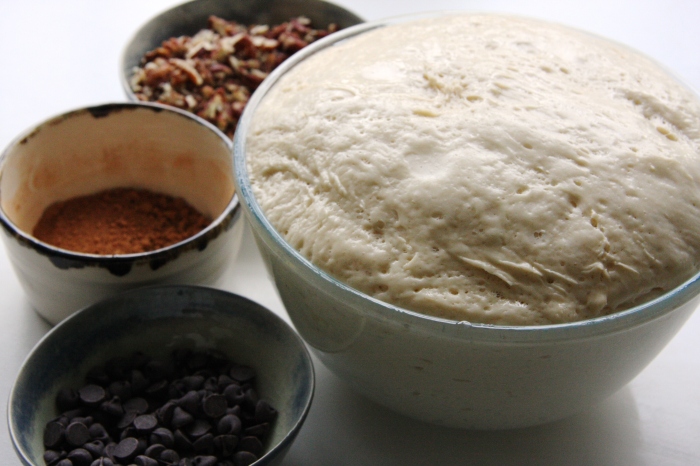 Tip the dough out onto a floured surface and knead briefly to knock back.

Roll the dough out into a rectangle.

Mix the cinnamon into the muscovado sugar and then sprinkle the sugar mixture, chopped pecans and chocolate chips evenly over the surface of the dough. 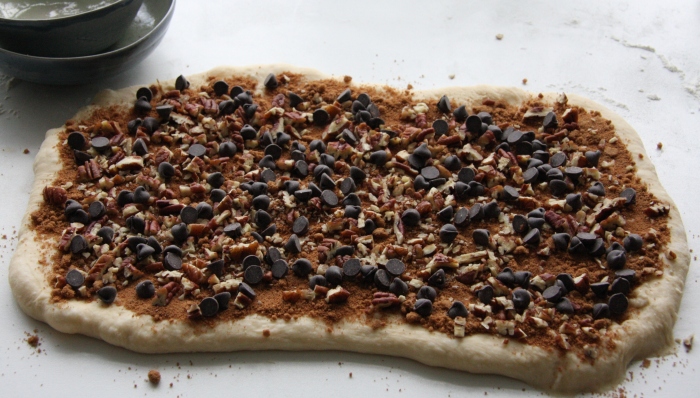 Roll the dough up to from the short edge to create a roll: 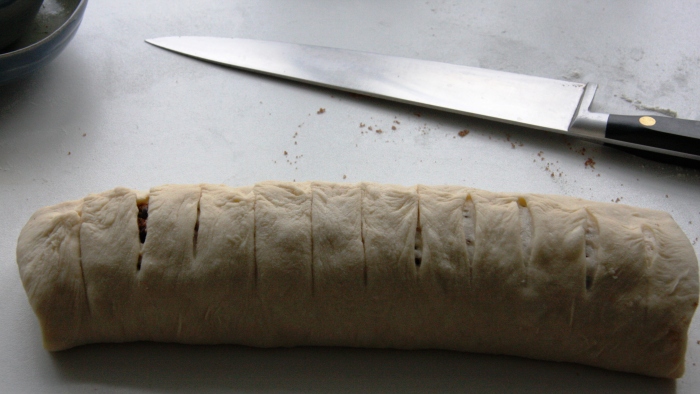 Divide into twelve equal sized pieces and cut. Put the rolls, cut side up, onto a baking tray, allowing some space between the buns. 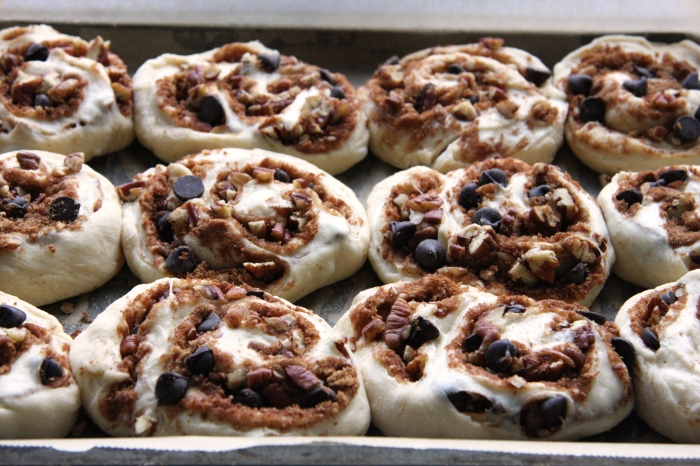 Cover and leave again to increase in size. Set the oven to 180°C. When the buns are around one and a half times their original size bake for around 30 minutes, until golden brown. 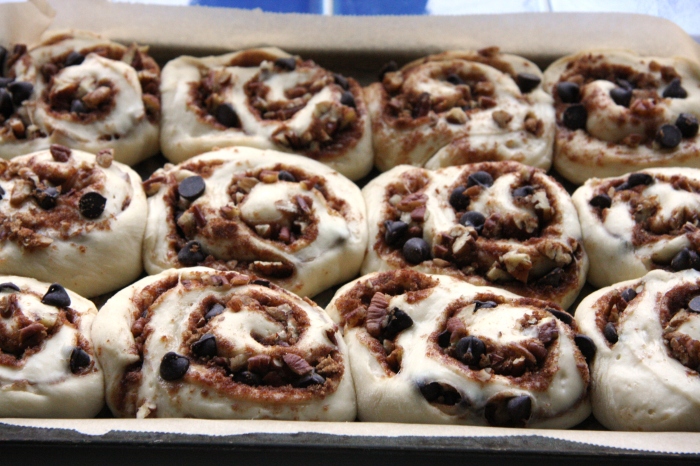 Allow to cool on a cooling rack (at least until they are not too hot to eat any more). 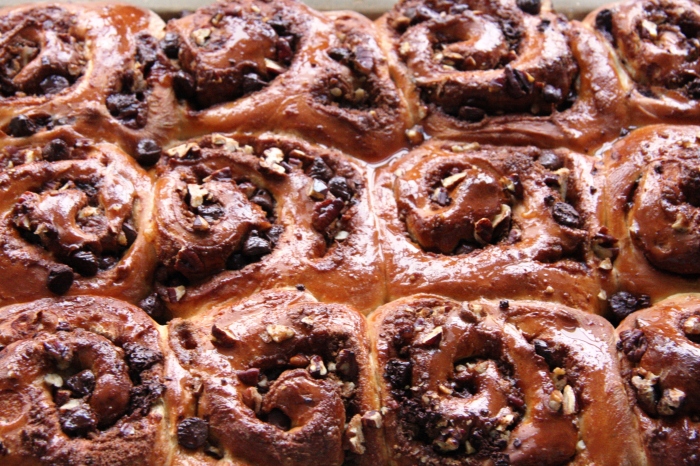