Finally I have my new house. Not that it is new by any stretch of the imagination: the first addition to the original cottage was done in Victorian times and I still have the original Victorian quarry tiles in the entrance hall. I also have a large variety of boxes, both packed and unpacked. I think it is going to be quite a while before the house is in any sort of proper order but I decided I have plenty of time to get it organised! It already feels like home but needs a fresh coat of paint throughout and then it will feel cleaner, brighter and mine.

The kitchen is much smaller than the one I had previously and I have spent days just walking around in circles looking at the boxes, wondering where everything is going to go and asking myself why I have so much “stuff”. It’s a great opportunity to declutter and work out what I really need and what I really don’t. The rest is going to the charity shop. But the biggest problem I have at the moment is the lack of wifi at home. Hopefully that will be sorted in the next couple of weeks but until then my online access is extremely limited: there is only so much you can do with an iphone with 3G connection just in a couple of rooms…

This weekend we have been at my parents’ house on the Isle of Wight and I have used the opportunity to forget about unpacking boxes and actually bake something. This lime and coconut tart is a perfect summery dessert.

Zest and juice of 4 limes

Line an 8″ or 9″ loose based cake tin with baking parchment. An 8″ tin will give you a deeper tart and will need a slightly longer baking time than a 9″ tin. I used an 8″.

Turn the digestives into crumbs, either by pulsing them in food processor or by putting them in a large plastic bag, sealing it and crushing them with rolling pin or your hands.

Add the melted butter to the digestive crumbs and mix well.

Add the melted butter to the crushed biscuits

Turn out into the lined tin and press down evenly so that the base is very firm.

Put the condensed milk and coconut milk into a saucepan and heat, stirring. Bring to the boil and allow to reduce by about a third to a half. It will become quite thick. It is a good idea to stir it often to stop it from burning on the base and also to make sure it does not boil over. It will probably take around half an hour or so. Allow to cool a little and add the lime juice.

Add the egg yolks and the flour mixture to the coconut and condensed milk mixture and mix well.

Pour the mixture onto the top of the digestive biscuit base and put the cake tin onto a baking tray.

Ready for the oven

Bake for around 30-45 minutes, depending on the size of your tin, until set in the centre. Remove from the oven and allow to cool down before removing from the tin.

This is good when it is still a little warm but also great chilled, and served in the garden, with whipped cream. 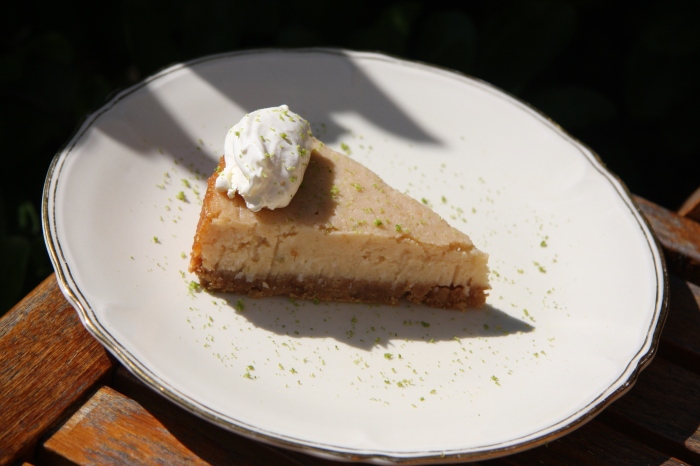 Lime and CoconutTart with Whipped Cream

Like Loading...
‹ Chocolate Birthday Cake with Strawberries and Cream, and New Adventures
Baking Birthday Cakes in a New Kitchen ›

There’s a new post on the blog! Maple, apple and pecan cake - what’s not to love! It’s delicious and healthier. Link is in the bio
It’s already Easter Monday. Have you eaten all your Easter chocolate yet?
Happy Easter!
Cranberry and chocolate hot cross buns make a great change from the traditional. They don’t last long though! Recipe link in the bio if you’d like to make them too.
Did you give up chocolate for lent? Still on vanilla? Not long to go now...
Spring flowers on a carrot cake...
Follow lovinghomemade on WordPress.com